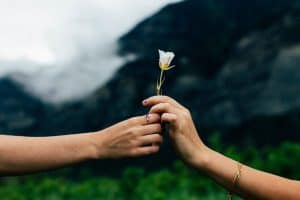 Does anyone else feel like America is stuck in a bad Hallmark movie and the source of our drama is a simple misunderstanding that could easily be fixed with a conversation?

Ten tribes of Israel gathered to make war against two of their brethren tribes. The source of the conflict? A beautiful altar.

Two tribes built an altar because of fear of what might happen in the future. The other ten tribes thought building the altar was disloyal and unfaithful. So the ten sought to fight the two.

But before the battle began, the two sides had a conversation. The two tribes, that were thought to be rebellious, shared why they built an altar. They were trying to solve a potential future problem. What was interpreted as an act of disloyalty was actually a desire to be faithful. The ten tribes now understood the heart of their brethren. They recognized the two tribes were actually saving them from the hand of the Lord.

War was averted. Because of a conversation.

I have been trying to listen more on Facebook. I have been reading viewpoints different from my own. And what I have come to realize is that if we can get past the polarizing language, and listen to our brethren’s hearts, we would find:

We are more alike than different.

We want the same things.

We could accomplish more working together than apart.

This Hallmark Movie has lasted way too long. Can we just get to the part where both sides have a conversation so we can have the awkward kiss and makeup?

“Today we know that the LORD is among us, because you have not committed this unfaithful act against the LORD; indeed you have saved Israel from the hand of the LORD.””