I have often wondered what it would have been like to be of age in the 60’s during the height of the civil rights movement, to march and stand with Dr. King, to be a part of such a historical era in history. 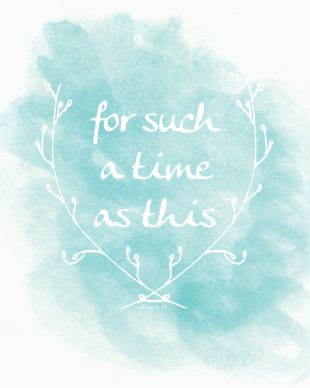 But I was born, you were born for such a time as this. God has strategically placed each of us on this earth, in this season to affect and influence those around us.

Esther was a beautiful Jewish girl. Orphaned by the death of her parents, raised by her uncle, placed in a harem at a young age. This does not seem like the beginnings of one who would change the destiny of a nation. This does not seem like the path for a history maker. But Esther had been strategically placed in her position and given favor so she could change history. It took courage on her part. She had to risk death. She had to risk the comfort of being in the King’s palace. But she recognized the responsibility she carried and with resolve, she declares, “If I perish, I perish, but I’m going to see the King.”

For if you remain silent at this time, relief and deliverance for the Jews will arise from another place, but you and your father’s family will perish. And who knows but that you have come to your royal position for such a time as this?” (Esther 4:14 NIV)