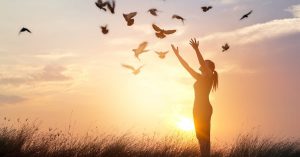 Forgiveness is powerful! It’s funny how releasing others from their debt frees us.

Joseph’s brothers were absolutely, positively wrong to sell their brother into slavery. Joseph had every right to be angry with his brothers. He had been ripped from his family, falsely accused, set in jail to rot all because of their actions. His brothers hijacked his life.

When Joseph is finally reunited with the very people who caused his grief, he was able to say,

“But now, do not therefore be grieved or angry with yourselves because you sold me here; for God sent me before you to preserve life.” Genesis‬ ‭45:5‬ ‭NKJV‬

Joseph was able to see God in his pain. Seeing the bigger picture allowed him to forgive his brothers, releasing them to forgive themselves.

In Luke 6, Jesus said, If you forgive, you shall be forgiven. The word used for forgive is “apolyo” which means to set free. Forgiveness frees you!

Thousands of years later, there was another man who was betrayed by a friend. He too was falsely accused. He was ripped away from his friends, crucified on the cross while the very people he came to help yelled, “Crucify Him.”

While He was bleeding, bruised, and hanging, he was able to say,
“Father, forgive them, for they do not know what they do.” Luke‬ ‭23:34‬ ‭NKJV‬‬

He released us to so that we can forgive others.

When I’m struggling to forgive, here are some things I do:
1. Remember God forgave me freely and continues to forgive me.
2. Ask the Holy Spirit to help me forgive.
3. Remember the good things the person who offended me has done in the past.
4. See what God did in my life in spite of the pain.
5. Try to understand the person’s backstory and ask God to give me eyes to see the person as God sees him.

We don’t have any control if someone hurts us, betrays us, or rejects us. But no one can imprison your soul without your consent. Forgive freely and soar.