Unrepentant. Unaware. They shouted for His death – a cruel, agonizing, shameful death. No one asked for forgiveness. Why would they? They were acting on behalf of God or so they thought.

Jesus, watched as they yelled crucify him! He willingly allowed the nails to be driven in His hands, His feet. The blood flowed and He looked at his accusers through the blood.

His eyes were not filled with anger, sadness, or disappointment but of love and compassion. Even as they advocated for His death, He advocated for their lives. “Forgive them for they are unaware of their actions.”

It’s a love that forgives freely and repeatedly.

If the love of God could extend forgiveness to those who called for His crucifixion, those who actively participated in His suffering, do you really believe your sin is beyond His forgiveness? Do you actually think your sin is greater than His love? More powerful than His blood? It is NOT! You are forgiven. 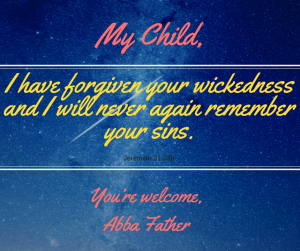 Today is a Good Friday!

“Jesus said, “Father, forgive them, for they don’t know what they are doing.” And the soldiers gambled for his clothes by throwing dice.”
‭‭Luke‬ ‭23:34‬ ‭NLT