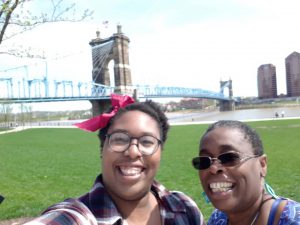 Honestly, I began to get a little nervous. Fearful even. I was not in Kansas anymore. We did not know exactly where we were going. We didn’t want to look like a tourist, so we didn’t have our phones out. We thought about turning around. There didn’t seem to be any businesses further down and we were about to enter a low- income residential area. I was concerned.

As we waited for the light to change, I took a risk and ask this young man for directions. He said, “Oh, you don’t want to go this way. Follow me and I’ll show you how to get there.”

Now, I’m really scared. I’m thinking, he is going to take us off the main road where there are witnesses and rob us. As we followed him, I noticed he had a knife in his back pocket. As we walked, I made small talk. I wanted to know as much about my robber as possible. He worked as a welder. His mane was Johnny and he was from Alabama. He had lived in the area for five years. He had just gotten off work and was headed to a second job. He was extremely nice. His story was similar to my own child’s story.

This nice young man whom I feared simply because of his address, walked a block out of his way, after getting off work and before going to a second job, to help two women he did not know.

Johnny was not my robber; he was my teacher.

He taught me taught me kindness is abundant in all socio-economic statuses.

He taught me not to judge people by their address.

He taught me not to generalize and make assumptions about people based on stereotypes.

But most importantly, Johnny revealed a bias hidden in my heart. Johnny taught me that even I, who grew up in the hood, who teaches and writes about overcoming prejudices, who is on a mission to eradicate prejudice attitudes among my friends, yes, even I who have personally felt the sting of prejudice, can succumb to fearing others based on preconceived ideas.

So what is my takeaway from my downtown excursion: We cannot allow fear to ever win. If I had allowed fear to win, I would have never met the nice young man, Johnny. I would have continued in my ignorance that people in non-gentrified areas are unsafe. The fear would have grown to include other groups of people. I would have missed out on an adventure with my daughter.

Friends, I beseech you, never allow fear to win in this situation. Don’t allow your fears of others because of the color of their skin, their religious beliefs, or their socio-economic status prevent you from meeting new people, going into uncomfortable situations, having an adventure. Do it afraid and watch what God will do in you.

“By this everyone will know that you are my disciples, if you love one another.”” John‬ ‭13:35‬ ‭NIV‬‬