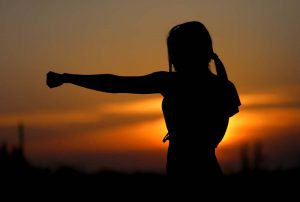 I’m reading the familiar story of David & Goliath. Whenever I read a passage that I have read often, I always ask God to give me new revelation. What caught my attention this morning was this:

The army of Israel and Goliath each stood on a mountain with a valley between them. Picture that. Every morning both sides would come out and take up their battle position. Israel shouted a war cry. Goliath shouted insults. The only difference was Goliath believed his trash talk. Isarael did not believe theirs.

The army of Israel was intimidated by Oliath’s size and his words. They had no evidence he was a mighty warrior. They feared because they had more faith in what they saw and the taunts of Goliath than in the power of the living God.

How often do we allow what we see and what we hear to have greater influence in our lives than what God has promised? How often do we stand on a mountain, position ourselves for battle, give a war cry then shrink away because we believe the lie of the enemy?

Sometime our problems become too familiar. Israel and Goliath did this dance for 40 Days. It had become a habit. Sometimes we get used to the knee pain, the failing marriage, the lack of finances, the two steps forward three steps backward dance. Sometimes like Israel, the battle position and our war cry is more about routine than power.

But then comes along David. He is indignant that this has been going on for so long. He is not intimidated by what he sees or the threats of Goliath. He has child like faith that believes God is who He says He is. He believes the promises of God more than curses of Goliath. He does not stand on a mountain and wait for Goliath to come to him. He goes to Goliath.

What is your Goliath this morning? What has become a routine battle for you? I pray the Warrior Spirit that was within David arises in us this morning. I pray child like faith and confidence in God’s power and God’s promises become alive within us and resurrects us from routine warfare void of power. I pray we will cut off the heads of our spiritual enemies, and take back everything that was stolen from us.

May we not just stand on a mountain and shout but may we go into battle, with complete assurance declaring: “Satan, you come against me with lies, threats, sickness, lack, dissension, but I come against you in the name of the Lord Almighty, the God of the armies of Israel, whom you have defied. This day the Lord will deliver you into my hands, and I’ll strike you down and cut off your head. This very day I will give the carcasses of your minions to the birds and the wild animals, and the whole world will know that my God is bigger than your lies and threats. All those gathered here will know that it is not by sword or spear that the Lord saves; for the battle is the Lord’s, and he will give you into our hands.””
‭‭Based on 1 Samuel‬ ‭17:45-47‬ ‭NIV‬‬

Then, let us take our sling shot (our praise, the word of God, our authority) and cut off the heads of the giants who have been taunting us for too long. Today is a good day to defeat a giant!