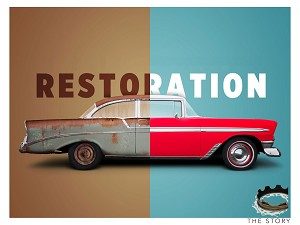 Yesterday, my daughter was scheduled to land in the midst of a storm.

As I drove to pick her up, the rains came down torrentially. The sky was dark with only the lightening lighting the sky every few seconds. This storm was scary. Intimidating. Intense.

By the time the storm had passed, Lyndsay texted. They had been diverted to Greensboro and I would have to pick her up later.

When I drove back to the airport a couple of hours later, all remnants of the storm were gone. The sun shined brightly. The grass was green. The streets and grass were dry. It was simply a beautiful North Carolina day. It was as if the storm had never happened.

God spoke to me this morning.

“I am bringing restoration after the storm. All evidence of the storm that has ravaged your Life will be erased. You will remember the storm. You will remember the devastation only as a reminder of My goodness, My faithfulness, My power, My ability to redeem and restore. You will make it to the other side of the storm. But not the same you who went into the storm. A stronger You is coming out. You are coming out more confident in My Word, My promises, My love for you. The you on the other side is more daring, more bolder, more fierce, more willing to take risks. You are coming out of the storm a survivor. A thriver. An Overcomer.”

If you find yourself in the storm, remember it’s temporary. Sunshine is returning. Dry ground is coming. Blue skies are on the way. He will not forsake you in the storm.

“And then, after your brief suffering, the God of all loving grace, who has called you to share in his eternal glory in Christ, will personally and powerfully restore you and make you stronger than ever. Yes, he will set you firmly in place and build you up.”
‭‭1 Peter‬ ‭5:10‬ ‭TPT‬‬