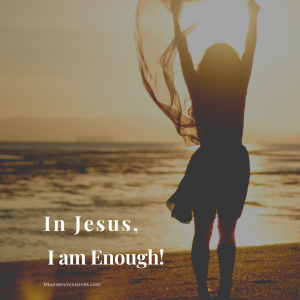 Scared. Hungry. Oppressed. Hiding while trying to thresh wheat with a winepress.

What a sad and pitiful scene. In the natural, we see a cowardly man, trying to eke out an existence in a dire situation.

Later we learn this man, Gideon, sees himself as insignificant. He thought of his clan as weak and himself as the least in his family. Not only did he have self-esteem issues, he doubted the God of his ancestors.

Gideon is not a likely hero – insecure, faithless, scared. But then, God happened.

“The angel of the Lord appeared to him and said, “Mighty hero, the Lord is with you!””
‭‭Judges‬ ‭6:12‬ ‭NLT‬‬

Mighty hero? Was the angel’s GPS off? Did he go to the right man? Did the angel not see what everyone else saw – a cowardly, timid, doubting man? No, the angel saw what God saw and God saw a mighty Hero!

Life can be hard sometimes. We pray and don’t see a breakthrough. Children rebel. Jobs are lost. Disappointment abound. Viruses threatened. Marriages end. And we sometimes find ourselves like Gideon, trying to just survive the day. And in the middle of the drama, we can start to believe the lies – God has abandoned us, I am insignificant, this situation will never change.

My friend, allow God to happen to you today. Hear is voice declaring over you,

“Rise up oh mighty Hero! Not only is the Lord with you, the Lord is within you!”

Not only is God reminding you of who you are, He is giving you your marching orders:

“Go with the strength you have. Stop waiting for goosebumps and trust resurrecting Power resides within you.

Rescue your situation from the hand of the enemy through prayer and spiritual warfare.

You have been chosen to go, to fight this battle, to win. So go.”

Although it took some coaching, Gideon eventually went. He destroyed the altars of Baal, won a battle, and led the heart’s of Israel back to the Father. Somewhere along the way, Gideon began to see himself as God saw Him. And when He did, he changed a nation.

Brothers and sisters, begin to believe who God says you are. Believe you can do what God says you can. And when you do, you will change your world!

“Then the Lord turned to him and said, “Go with the strength you have, and rescue Israel from the Midianites. I am sending you!””
‭‭Judges‬ ‭6:14‬ ‭NLT‬‬