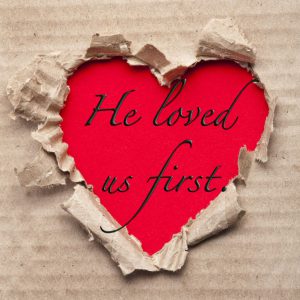 God so loved the world in “general.” He loves…Christians. He loves… law abiding citizens. He loves…evangelicals. He loves…Republicans. He loves those who are moral? (We would never say this…but do we act as if this true?)

Breaking News: When Jesus said, God loves the world, He meant every single person in this world. Every single person was created in the image of God and God is pursuing every person to come back to him. Every person. The wicked. The immoral. The Atheist.

God loves each person individually. I imagine if an angel named any random person on the planet and asked God to describe him, God’s eyes would light up as he described traits and beauty perhaps only visible to God at this moment.

When I am confronted with the obnoxious kid, I need to look beyond their rough exterior and see that kid as someone whom God loves.

When I hear stories about illegal immigrants, condemnation should not rule my heart but compassion becauseI those immigrants are loved by God.

When political leaders say and do things that make me cringe, rolling my eyes should not be my default but rather praying God would give them wisdom. That leader is loved by God.

When a celebrity is caught in the act of perversion, judgement should not be my first thought but extending grace because that celebrity is loved by God.

When a disturb kid picks up a gun and kills people in a mass shooting, fear should not be the ruling emotion but sorrow for that hurting kid. God loves that mass shooter.

Armed with this revelation of God’s love, my response as a Christian, as an ambassador of Jesus (not as an officer of the law) is to love each person as God loves them. To pray for them. Bless them. Share the Gospel. Be a demonstration of God’s hands and feet. Show compassion.

How would my world change if everyone I encountered today, I treated and interacted with them as they were God’s best friend? What if I looked at every person today – the rude, the obnoxious, the person with a different political viewpoint, a different religion – and treated them as someone who God loved? Let’s try it and see what happens.

People are Flawed. Jesus’ love for people is not flawed. Let’s love like Jesus!

“For God so loved the world that He gave His only begotten Son, that whoever believes in Him should not perish but have everlasting life. For God did not send His Son into the world to condemn the world, but that the world through Him might be saved.” John‬ ‭3:16-17‬ ‭NKJV‬‬