There is a war brewing. It’s not happening in a foreign land or even on the homeland. It’s closer. More personal. There is a war waging and the boundary lines are your ears. The war that’s raging is in your mind.

The enemy has one objective. To challenge your identity in Christ. He started in the Garden. Eve, if you eat you will be like God. Eve had already been made in the image of God. She had all of her needs met. But the enemy came in and sowed a seed of discontentment. Eve lost everything because she didn’t know who she was.

The enemy tried to used that same technique on Jesus. He waited when Jesus was tired, alone, hungry and started his nonsense. “If you are the Son of God perform…” Jesus was having none of this. Jesus was secure in His Identity; He was secure in the Father’s love. He silenced the enemy with the Word. (Just so you know, you are only allowed to beat up the devil with the Bible, not people.)

We, like Jesus, can be victorious in this war waging in our minds. Like Jesus, we will be successful when we are secure in our identity and secure in God’s love for us. So how do we fight?

1. Identify thoughts that are from the enemy. Any thought that causes you to feel guilty, condemnation, fear, anxious, insecurity, jealous, offended, worthless, unloved by God, or hopeless is from the enemy.

2. Take the thought captive and make it obedient to Christ. Say “This thought is not from God. It is a lie of the enemy.” Then get in the Bible and find truth. Find a scripture that contradicts the lie of the enemy. Meditate on that truth. Declare that truth. Every time the enemy speaks the lie, you beat him up by declaring truth. The Word will not return void. It will accomplish what is sent to do: encourage and strengthen you.

3. Just Do It. It is no coincidence that Jesus was tempted when He was about to start His Ministry. The lies of the enemy are to lull you into a place of inactivity. “You are not smart enough; not holy enough. You can’t teach like so and so, pray like so and so. You are inadequate and so just stay right here on the sideline.” Lies. Lies. Lies. He is afraid of the Jesus in you! He knows (he has read the book) when you get a revelation of the strength, the beauty, the wisdom, the authority you have in Christ, his days are numbered! So just do it. Pray for the sick, preach the gospel, go on that missions trip, write the book, start that business, serve in church. Take captive the lie that you are inadequate and embrace the truth that you have been equipped with every spiritual blessing.

Friends, no one is immune to this war. Just this week, the enemy was lying to me about the upcoming Women’s conference. “No one is coming. You don’t have anything original to say. Who do you think you are to host a conference?” Lies. Lies. Lies. So I enlisted the prayers of my friends (you don’t have to fight alone), I took captive my thoughts and I began to declare: “I have been made sufficient in Christ to preach the gospel. I am equipped for every good work. I lack nothing. I am rich in Him. Every good deed prompted by faith will come to fruition. I have favor with God and man.”

Whatever thoughts are raging in your head today, take them captive and force them to be obedient to Christ. Yes, the war is real but YOU ARE VICTORIOUS!

“The weapons we fight with are not the weapons of the world. On the contrary, they have divine power to demolish strongholds. We demolish arguments and every pretension that sets itself up against the knowledge of God, and we take captive every thought to make it obedient to Christ. And we will be ready to punish every act of disobedience, once your obedience is complete.”
‭‭2 Corinthians‬ ‭10:4-6‬ ‭NIV‬‬

Ladies, this is a sample of just one of the impactful messages God has given me to share with you. Please join us for the Triumphantly Free Conference and learn more about your identity in Him! 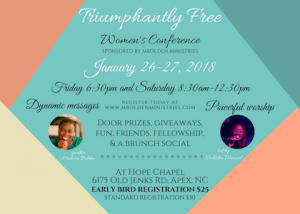