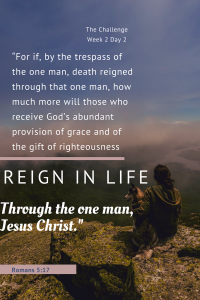 Eve led Adam astray. Therefore women can never be in a position of authority over a man. Right? Because Eve’s act of disobedience was MORE POWERFUL than Jesus’ act of redemption. Because Jesus died to restore men only; His redemptive, restorative blood was insufficient to break the judgment pronounced on women at the Fall. Right? WRONG!!!!

Paul writes: “Nor can the gift of God be compared with the result of one man’s sin: The judgment followed one sin and brought condemnation, but the gift followed many trespasses and brought justification. For if, by the trespass of the one man, death reigned through that one man, how much more will those who receive God’s abundant provision of grace and of the gift of righteousness reign in life through the one man, Jesus Christ!” (Romans‬ ‭5:16-17‬ ‭NIV)

Eve’s act of disobedience was redeemed on the cross and now men AND WOMEN are now free to reign in this life. Women have been restored to their initial position as a”help meet” to walk side by side with man, pushing back darkness, subduing the earth, and bringing heaven to earth. We can lead, teach, preach, write, heal the sick, cast out unclean spirits. In the Kingdom of God there is no distinction made between male or female. We are all one!

Ladies, don’t believe the lie you are still reaping the consequence of Mama Eve’s transgression. Jesus’ blood was more than sufficient to eradicate your debt. He paid it all for all. So ladies, you have received God’s abundant provision of grace and His gift of righteousness, therefore go and reign in this life through Jesus!