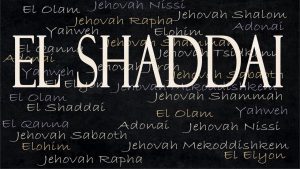 After they left Egypt, the Israelites were led by a cloud pillar by day and a fire pillar by night. The cloud or the fire was always there. In the the wilderness, they were introduced to Jehovah Shammah, the God who is there.

They were trapped. The sea on one side. A raging army on the other. What would they do? They cried out in fear. But Moses raised his staff, the sea parted, they went through on dry land. Pharaoh and his army destroyed. In their time of trouble, they were introduced to El Shaddai, the Lord God almighty.

They had traveled for three days and found no water. Finally, they find water but it is bitter. They were thirsty, physically exhausted. The disappointment of the bitter water was too much. So once again, they complained. They longed for the comfort of being oppressed. But in their extreme dehydrated state, they were introduced to Jehovah Rapha, the God who heals.

Each problem they encountered, was an opportunity to encounter a different aspect of God’s goodness and His character. The same is true today. What if instead of declaring we are sick, depressed, lonely, in lack, hurting, scared, or whatever our latest problem, we declared, I have another opportunity to encounter Jehovah Rapha, Jehovah Shammah, El Shaddai, Jehovah Jireh, Baal Perazim (God of the Breakthrough).

Whatever your circumstance today, God is there wanting to reveal a different aspect of His goodness to you. Expect it.