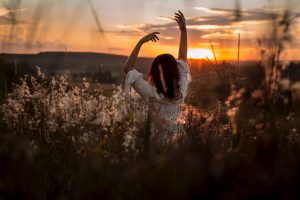 The children of Israel had been in captivity for 70 years. God commanded them to prosper in their captivity. Now, they are headed home, back to their land. If you think about it, this generation returning had only known captivity. So going back to their promised land was scary, full of the unknown, some may have preferred to stay in captivity, after all, it was all they knew.

Now, they are returning to their land of promise to rebuild their temple.

When Ezra led the exiles back, the leaders voluntarily took up an offering. God provided extravagantly!

Whatever you need for promise land dwelling, God has unlimited resources available for you. He will surround you with the right people, and the finances you need. He will equip you and there will be a new anointing, a new grace to do what He has called you to do. He who gave you the vision will also give you the provision.

As you enter into your promise land, Remember, God Himself goes before you and He is clearing the path for you. He is making a way for you.

Don’t fear the unknown. Embrace it.

When they arrived at the Temple of the LORD in Jerusalem, some of the family leaders made voluntary offerings toward the rebuilding of God’s Temple on its original site, and each leader gave as much as he could. The total of their gifts came to 61,000 gold coins, 6,250 pounds of silver, and 100 robes for the priests. (Ezra 2:68-69 NLT)