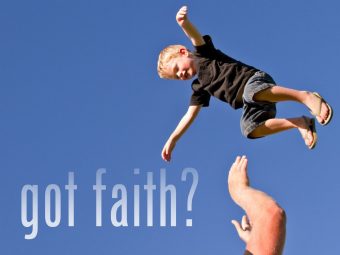 God never calls us to deny facts. Admitting you are sick, in need, weak is not a lack of faith. Faith does not deny facts; faith just doesn’t allow facts to rule our hope, our emotions, or our belief in the promises of God.

An example of this is found in II Chronicles 20 in the story of Jehoshaphat. The prophet did not advise Jehoshaphat to stay in his town and ignore the army that was coming against him. When the news of the on coming army came, Jehoshaphat did not say, “There is no army in the name of the Mesiah.” He acknowledged the army but his faith led him to pray.

The prophet told Jehoshaphat to go out and face the impending army. Herein lies truth: Faith faces the problem. Faith does not pretend everything is ok. Faith does not put on a happy face while dying inside. No, faith goes toe to toe with a circumstance and declares truth over it until truth becomes the reality in the natural. Faith is unrelenting.

Do you feel as if an army is attacking you today? Heed the words of this Old Testament prophet:

This is what the Lord says to you: ‘Do not be afraid or discouraged because of this vast army. For the battle is not yours, but God’s. Tomorrow march down against them. They will be climbing up by the Pass of Ziz, and you will find them at the end of the gorge in the Desert of Jeruel. You will not have to fight this battle. Take up your positions; stand firm and see the deliverance the Lord will give you, Judah and Jerusalem. Do not be afraid; do not be discouraged. Go out to face them tomorrow, and the Lord will be with you.’ ” (‭2 Chronicles‬ ‭20‬:‭15b-17‬ NIV)

Go out and face your trouble, knowing the battle is the Lord’s!